(TABLE OF CONTENTS ON PAGE 1)

TIPS TO REDUCE RISK OF

AND YOU THINK YOU'RE HAVING A BAD DAY!

Here's some useful information to reduce the risk of shark attack!  First of all, keep in mind that you have a much higher chance of being maimed in a car wreck than you do being attacked by a shark.  Too, shark attack is generally less PAINFUL than a car accident, because...

(What terrible flooding!  Look close...look REAL close.  This photo was taken on the Isle of Wight (southern England), opposite Betty Haunt Lane (supposed to be haunted); on the brow of the hill is an old pub "The Blacksmiths Arms", the road leads to Carisbrooke which has a Norman castle (11th century) standing over it where Charles the First was imprisoned before being decapitated.  A resident there identified the location for us..  Thanks for the geography lesson, Rob!)

--sharp teeth cut like butter - many people who have been bit don't even know it - they think a friend is pulling on their leg or arm, or squeezing them, until they realize there's no friends nearby, and the color of the water changes to red.

--sharks often bite extremities (arms and legs) so an artery is often severed, causing blood loss, shock and death rather quickly - usually one bite does it all!

But the extreme terror we feel at the thought of losing an arm or leg or being eaten by a wild animal while still alive is worse than the mental adjustment we make to injury and death by car which is so much more common.

At any rate, it's good to know something we can do to minimize our chances of making ourselves a shark's version of buffalo wings  .. so here goes -

1.  Do not wear jewelry in the water.  Sharks and even barracudas love to bite at sparkly things - why do you think they make lures that way that work so well?  Do you want to make yourself a lure?

2.  Do not swim at twilight or at night.  That is a shark's normal feeding time.  Hear the dinner bell?  Don't set their table for them with yourself as the main entree.

3.  Get out of the water if you see schools of fish jumping.  They jump to get away from a shark that's feeding on them!  We observed two men here at Myrtle Beach watching the fish jumping all around them, laughing and trying to catch them, while 100 yards away, coming toward them, were two feeding sharks.  Pay attention to your surroundings!  The schools of fish are just the parsley on the plate if the shark runs into you in the middle of the school, right?

4.  Uneven tan lines - you know those farmer tans where the shirt sleeve and socks leave the skin white?  Those parts of your skin look like bait compared to the rest of you!  There is a time to use instant tanning solution!

5.  The color yellow - called by shark attack experts "Yum Yum Yellow".  Need I say more?  Okay, so contrasting colors in some of our stylish bathing suits for guys as well as for gals also make an interesting pattern that means lunch too.  Look at it from a shark's view - colorful food makes for a Galloping Gourmet appetizing dish!

7.  Menstruating women - blood is blood, and sharks can smell a drop of blood in water from many miles away .. keep that in mind before entering the water.  A good day to make a sand castle, ladies?

8.  Urinating children - any bodily fluid in the water is like the smell of apple pie wafting through the kitchen - the shark's kitchen - and everybody knows there's plenty of such fluids in the water at any public beach, and not just from kids either.

9.  A dropoff next to a shallow area - sharks just love to do their grocery shopping off the shelf - how close are you to the edge of the shelf can make you a real bargain!

10.  Swimming alone?  Did you know even a good swimmer looks like an injured fish to a shark?  We're not aquatic creatures, you know.  And you've seen what sharks do to other injured sharks, haven't you?  It's that weakest link again.

11.  Scuba divers - near a seal colony in particular - what makes you think you DON'T look like a seal?  That yum yum yellow stripe on your diving suit?  Not on your life.

12.  Spear fishing.  Done in a scuba suit in the water, of course.  Injured fish give off a chemical that to a shark is like that smell of apple pie to us - come and git it! Just ask Rodney Fox.  Some divers even keep the catch of speared fish on a string on their belt while they spear more - gee, I think I'll eat the biggest fish on the string first - the diver!

13.  Divers can tell you that sharks seem to be attracted to certain divers more than others - whatever scent they unknowingly give off - so some divers take chlorophyll tablets to mask their scent before they dive.  It's a neutralizer that masks the human scent.

14.  Think you're safe in shallow water?  Most attacks take place in waist deep water or less.  Remember that shark-eye view - so many legs, so little time .. Sometimes there's no reason at all that makes a shark aggressive - one case of a grandmother walking her grandson along the edge of the beach saw a dark form headed straight for them, lifted her grandson in the air, only to see a four foot shark beach itself in an attempt to bite him.  As they continued their walk on the dry area of beach, several more sharks followed them 200 yards up the beach. 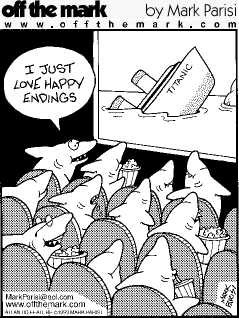 1916 was considered a "shark year" for the record number of aggressive shark attacks along the East Coast of the U.S.  Theories of the ocean currents bringing more sharks closer to shore may have credence.  As you may have noted from recent reports, 2001 was labeled another "shark year" for the increased number of attacks once again.  2002 has had some high numbers of incidents as well.  May be a double year marathon going on here.  Global warming is a new factor.  Sharks like the same temperature of water that we bathers do, at the same times of year.

It pays to be alert to the world around you.  This should not keep you from swimming in the ocean; however, taking these basic precautions and even watching out for others is certainly good advice. Sharks do what comes naturally to them.  Just don't get in the way when a shark is being natural, y'hear?

(TABLE OF CONTENTS ON PAGE 1)